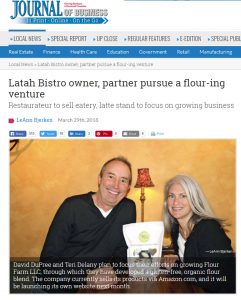 “I started the restaurant because I wanted to bring quality, flavorful food to this area and I was fortunate to be successful in that,” says DuPree. “But I’m moving in a bit of a different direction now, and it’s time for someone new to take the reins.

The 59 year old DuPree started Latah Bistro and Latah Latte in 2004 and 2005 respectively. Both are located along South Cheney-Spokane Road, off Highway 195 near the Qualchan Golf Course.

As of April 1, he says ownership of both the restaurant and coffee stand will transfer to his friends, Susan and Mike Readel.

“I’ve known Susan and Mike for about 15 years now, as they’ve both been regulars at Latah Bistro since we started,” he says. “They both love good food and dining experiences, and it was just a really natural fit to have them take over.”

Once the two businesses are sold, DuPree says he will focus on growing his newest venture, Flour Farm, into an internationally known brand of gluten-free flour and related products.

He says Flour Farm was founded through efforts to develop a new product at Latah Latte-and a relationship that first took root at Latah Bistro.

“I’ve always been a musician, and I still play at the Bistro,” he explains, “And I met my business and romantic partner, Teri Delany there when she stopped in for a meal one evening.”

DuPree says the two hit it off. Soon, Delany found herself taste-testing ideas for a new hand-pie recipe that was being developed for use in the Latah Latte stand.

A hand pie is a semi lunar-shaped pastry with either a sweet or savory filling, made by placing a dollop of filling onto a circular piece of biscuit-style dough and then folding it over and crimping it shut.

Delany, who now serves as CEO of Flour Farm says, “My background was in working with special education students, who often have specific nutritional and dietary needs. I could tell right away that the recipe needed some work, so I volunteered to experiment with it.”

Delany says the goal was to create a quality pastry that could e premade, frozen, and easily reheated, yet still taste fresh and flavorful.

“I determined that in order to do that, we needed to take out the gluten and use as many organic, quality ingredients as possible,” she says. “Eventually, I developed this flour blend, and the resulting pasty was delicious.”

The couple say demand for the new hand pies was so intense they had trouble keeping up, as customers who frequented the coffee stand soon began asking for larger special orders.

“People just couldn’t get enough of the hand pies,” says DuPree. “Eventually the folks at Starbucks heard about them too and reached out to ask whether we might consider mass production them.”

DuPree and Delany say they initially began to research plans for a bakery or factory space where they could mass produce the hand pies, but eventually decided to focus first on producing and marketing their flour blend.

“We hadn’t realized just how big of a demand there is for gluten-free foods that taste good,” says DuPree. “The gluten-free mixes on the market now aren’t able to achieve quality flavor while also maintaining a longer shelf life.”

The two soon began traveling to natural and organic food conventions to meet with potential flour suppliers and others in the industry who might be able to help them manufacture their product.

“We talked with a lot of different suppliers and traveled all over the world to visit them and research the farms.” Says DuPree. “It was important to us to find quality ingredients produced with ethical practices.”

In 2015, DuPree and Delany founded WeCreations LLC which serves as the parent company for Flour Farm LLC. While Delany is CEO, DuPree serves as its chief financial officer.

DuPree says 60 percent of the company’s ingredients come from suppliers in California, while the remaining 40 percent are shipped in from overseas suppliers in Italy, Thailand, and the Philippines.

“Once milled, ingredients are passed to our manufacturer to be blended and packaged.”

So far, the flour blend is available in either a 30-ounce recyclable pouch, or a larger 25-pound bag.

The company’s website also includes recipes Delany has developed over years of experimenting with the flour blend, including directions for making cookies, crepes, muffins, pancakes, waffles, pizza crust, and bread.

We’re still testing out new possibilities of things we can make with the flour-like pastas, coatings, and pizza skins,” she says. “Each recipe I publish also includes links to affiliated products I use in cooking, like scales and measuring tools.”

According to Delany, if a customer follows an affiliated link and buys a particular cooking product, Flour Farm’s agreement with Amazon allows for 50 percent of those sales to go to 2nd Harvest Food Bank here in Spokane.

“It’s just another way we thought we could help give back to the local community, by making sure people here aren’t going hungry either,” she says.

Looking ahead, DuPree says the company’s current focus is on selling its flour locally, nationally, and most importantly, exporting it worldwide.

“Our largest target right now is exports because most of the interest in our product is coming from overseas,” he says. “This whole next month, we’ll be traveling and working to develop those relationships.”

DuPree says the company also has reached out to regional distributors of natural and organic foods, such as Rhode Island-based United Natural Foods Inc., about the possibility of supplying local grocery stores with its flour blend.

“Right now, I’d say about two-thirds of our distribution is going through Amazon, where customers can purchase a small pouch or buy wholesale,” he says. “Domestically, we’re just going to take things slow and negotiate relationships with distributors over time.”

He says the company also is seeking a local co-manufacturer to begin mass producing its popular hand pies, and perhaps other products created with its flour.

“Eventually, we’d like to begin brand labeling different products and sell those individually or in bulk as well,” he says. “But we’re really just getting started on research for that.”

DuPree and Delany both say they’re hopeful that as awareness grows and demand for gluten-free products increases, more companies will join them in the market, and products will become more affordable.

“We welcome that competition, because if there’s anything we’ve learned over the years, it’s that people will always want to buy quality, flavorful food at a good price,” says DuPree.

When considering future business prospects, DuPree says he wouldn’t rule out the possibility of owning another restaurant.

“There are so many opportunities coming our way that nothing would surprise me,” he says. “I think the trick would be to keep it simple and have fun.”

Although he declines to disclose recent revenues for his former Latah businesses, DuPree says sales at both have increased in the past four years as more people move to south Spokane.

“We’ve seen an influx of people moving to the Eagle Ridge neighborhood and surrounding community these past few years,” he says.

He adds, “The bistro has been what I’d call a home-run investment since our doors opened. The coffee stand was a bit slower to take off, but that too has been a wonderful business.”

DuPree says the businesses’ new owners, the Readels, plan to keep most of the 24 employees that make up the staff of the two businesses.

“Some of our staff are seasonal hires, but most have been with us a long time, so it’s good to know they’ll be staying on,” he says.

Already thinking of the future, Readel says she and her husband have been working with local contractor Mark Steffan to begin converting an adjacent, 800-square-foot office space into a new wine bar and tap house, which will connect to the existing Latah Bistro via an arched entrance.

“We’re thrilled to be adding a new wine bar, tap house, small plates space,” she says. “Construction should start next month, and we hope to be finished later this summer.”

This site uses Akismet to reduce spam. Learn how your comment data is processed.

An important note: Recipes successfully uses Flour Farm Organic Gluten Free Flour Blend. This blend is found online at Amazon.com or in a few local grocery stores. If you are unable to locate it please send us a message, and our team will get it out to you. If you choose to make this with another flour blend, please note that your results may differ.